Rewire Your Brain for Happiness in 4 Simple Steps 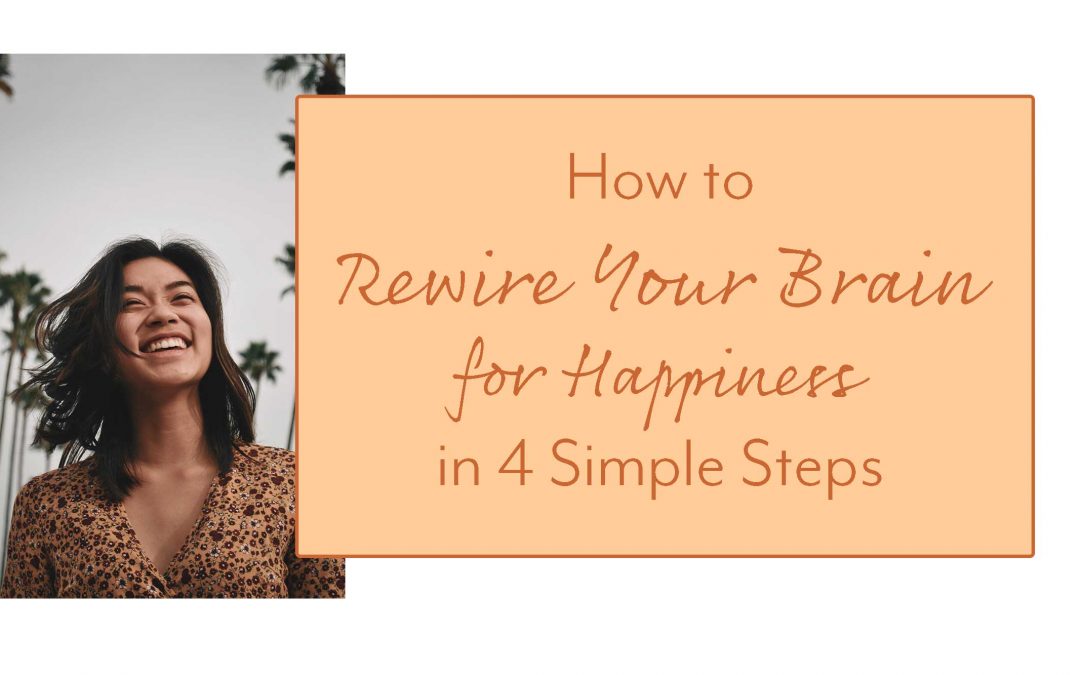 Rewire your brain for happiness?

It sounds like the plot of a cheesy sci-fi movie where humans turn to robots and you aren’t quite sure if the mad-scientist protagonist is really good or evil.

But whether you know it or not, you’re already rewiring your brain every single day.

And you don’t need a mad scientist to help you rewire your brain for happiness.

The systematic training of the mind, the cultivation of happiness, the genuine intertransformation by deliberately selecting and focusing on positive mental states and challenging negative mental states is possible because of the very structure and function of the brain.

But the wiring in our brains is not static, not irrevocably fixed. Our brains are also adaptable.

Once you understand the basics of how your brain works, you can actually choose the direction of your thought patterns, emotions, behaviors, and life experiences. (1)

And these choices can rewire your brain to make happiness easier.

So instead of feeling like you’re a victim of circumstance, you get to take control of how you feel.

I kid you not!

This is powerful stuff.

Because once you take charge of your brain, you can literally change your whole life experience.

It’s all thanks to something called neuroplasticity.

Neuroplasticity is your brain’s ability to change throughout your life.

This means that every thought you have, every action you take, and every reaction you have to the world around you all influence the wiring in your brain. (2)

Let’s break this down to get a clearer picture.

You have about 86 billion nerve cells in your brain and body.

These nerve cells are called neurons.

And they’re all connected to each other in this giant, gorgeous patch-work, web-like network called your nervous system.

The “palm” center of the neuron is called the nucleus.

And off of the nucleus are “fingers” called dendrites and axons.

Each finger reaches out from the center of the neuron to connect with other neurons. 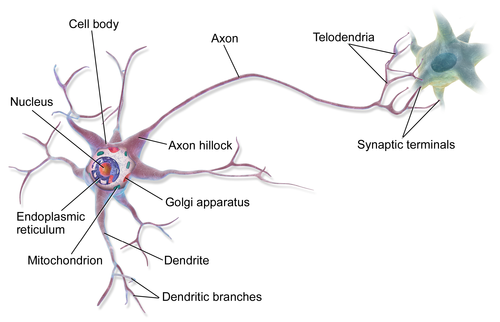 These connections are how neurons talk to each other so you can function and make sense of the world.

Every time you smell something, think something, feel something, or need something, your neurons are arranging themselves to make the proper connections so the messages they’re sending get where they need to go.

But even though their work is essential for your survival, neurons are actually pretty lazy.

They don’t like to spend any more energy than they have to.

Instead of going out and schmoozing with as many neurons as they can, they’d prefer to stick with their close-knit inner circle.

So they strengthen their inner-circle connections by building “roads” to get where they want to go faster and with less effort.

The more a neuron needs to talk with a specific neuron friend, the more established the road is to get to them.

So the more you react to a situation with negative emotion, the more established that connection gets.

The more you react with a positive emotion, the more you’re rewiring your brain for happiness.

Inner-circle neurons basically have highways between them.

Meanwhile a new connection, or one that isn’t used very often, will just have a dinky little walkway that takes a lot more effort to get to.

The bigger the road, the harder it is to change.

And this’s basically what a habit is.

But you have a hellovalot more neural habits than you think you do.

Because we’re not just talking about things like biting nails and drinking coffee.

Anything you’ve ever learned forms a neural connection.

The more you practice it, the stronger that connection becomes.

And the stronger the neural connection is, the more ingrained that habit becomes in your system.

This includes everything from your subconscious body functions like your heart beating, to your ability to drive a car, to every thought and feeling that you have in reaction to the world around you.

You can see this in action in babies learning how to walk, for example.

First the kid has to learn how to balance on two legs.

Then they practice taking steps while holding onto things around them.

And finally they’re able to put it all together and start walking.

Those neural connections are getting stronger each step along the way.

At first it takes a lot of thought and effort.

But once those highways in the brain are established, that kid is ready to RUN!

And here’s what all of this has to do with happiness.

Most people don’t think of them this way, but your emotions are habits too.

The more you practice responding to the world around you in a certain way, the more likely you will be to have that same reaction again.

But because of neuroplasticity, you have the power to break your emotional habits if you want to.

So you can either keep living in a reactionary, default state where you don’t have control over how you feel.

Or you can make it easier on yourself and rewire your brain for happiness.

And there are just 4 steps you have to take to make this happen.

1. Become aware of your reactions.

The first step is to become aware of how you’re currently wired.

The best place to start is to catch yourself after you’ve had a negative or positive reaction and just take note of how you responded.

If your response didn’t feel so good, try not to judge yourself.

Remind yourself that it’s just an emotional habit.

Every reaction is loaded with all the baggage from any previous reaction you’ve had in your life, so there’s a lot more going on than meets the eye in any moment.

2. Let yourself feel whatever you’re feeling.

The more you can soften around your emotions and be gentle with yourself, the more you will be able to transform what isn’t serving you.

And while your automatic reaction is to push against or try to run away from negative emotions, this actually just keeps them around longer.

The best way to transform a negative emotion is to let it express itself in your physical body.

So when you feel like crying, let those tears flow.

Dare yourself to do it.

If you want to punch a pillow, put on those boxing gloves.

Because emotions are just energy in motion.

So you have to let them move or they get stuck, and that’s what causes feelings like anxiety and frustration.

In order to let go of negative feelings, they have to be expressed.

Once you express them, you’re free to move onto the next phase of rewiring.

The next step is to strengthen the neural connections in your brain that feel better.

But you can’t just jump from frustration to bliss.

So giving yourself quiet time every day to just be, without an agenda, is a crucial step to rewiring your brain.

The more you can experience whatever you’re experiencing without indulging in the stories your mind wants to tell, the better you will start to feel.

Meditation and mindfulness practices are the best ways to do this. (3)

But you have to show up for your practice every day.

Or at least as often as you can.

Because the more you practice, the stronger the connections in your brain will become.

4. Focus on things that feel good.

And finally, if you want to rewire your brain for happiness, let yourself be happy!

Again, whatever you focus on will strengthen those connections in your brain.

So whenever you notice that you feel good, milk it!

Love the softness of your sheets?

Channel your inner puppy and roll around in them for a while.

Notice your heart flutter when you hear your niece laughing?

Let yourself linger there and maybe tell her a joke to keep it going.

Another thing you can do is to make lists of things that you appreciate.

Writing things down by hand is a great way to focus and strengthen those neural pathways. (4)

The more you practice feeling happy, the easier it becomes.

And now I’d love to hear from you.

What makes you feel joy, love, or gratitude?

Please leave a comment and tell me one thing that lights you up.

Because whatever it is is sure to make other people feel better too.

I can’t wait to read what you have to say!

And learn 4 powerful strategies to transform stress and anxiety into ease, joy, and inner peace.

Katerina Baratta, LAc, MS, is a holistic mental health practitioner, teacher, and writer, dedicated to helping you show up for life the way you want to.

This website uses cookies to improve your experience while you navigate through the website. Out of these, the cookies that are categorized as necessary are stored on your browser as they are essential for the working of basic functionalities of the website. We also use third-party cookies that help us analyze and understand how you use this website. These cookies will be stored in your browser only with your consent. You also have the option to opt-out of these cookies. But opting out of some of these cookies may affect your browsing experience.
Necessary Always Enabled
Necessary cookies are absolutely essential for the website to function properly. This category only includes cookies that ensures basic functionalities and security features of the website. These cookies do not store any personal information.
Non-necessary
Any cookies that may not be particularly necessary for the website to function and is used specifically to collect user personal data via analytics, ads, other embedded contents are termed as non-necessary cookies. It is mandatory to procure user consent prior to running these cookies on your website.
SAVE & ACCEPT